Despite being immovable, buildings must be incredibly versatile because the standards that influence their design are ever-changing. Continually, architects and designers are urged to consider the energy footprint a building leaves behind for both environmental and financial reasons.

According to non-profit organization Architecture 2030, building operations account for more than 40 percent of energy consumption, with construction and building materials making up an additional 6 percent.

Energy codes are necessary to reduce energy consumption, and architects and designers must pay heed to codes pertaining to construction practices, materials, equipment and systems and window efficiency when planning new buildings. These professionals should consider three overarching trends related to energy codes and sustainability standards that have emerged in recent years.

Increase in Adoption of Energy Codes

Because politicians are making the curb of energy consumption a central part of their political platform to help decarbonize the country, more states are adopting energy codes. As of May 2019, almost all 50 states have adopted an energy code of some kind.

ASHRAE 90.1 is the primary code with the greatest impact on glass and glazing. This organization sets the standard for performance and sustainability.

Although a handful of states have not adopted a statewide energy code or fully enforce ASHRAE 90.1 or a code with similar benchmarks, many have adopted the 2010 version of ASHRAE 90.1. Some states, including Oregon, California, Nevada, Florida and Massachusetts, have adopted the latest 2013 version of ASHRAE 90.1 or utilize an energy code that exceeds the energy efficiency recommendations outlined by ASHRAE standards.

Other states have adopted codes from the International Code Council (ICC). The ICC is an association dedicated to the development of standards to construct safe, affordable and resilient structures. ICC codes provide a minimum baseline standard for structure safety and energy efficiency. 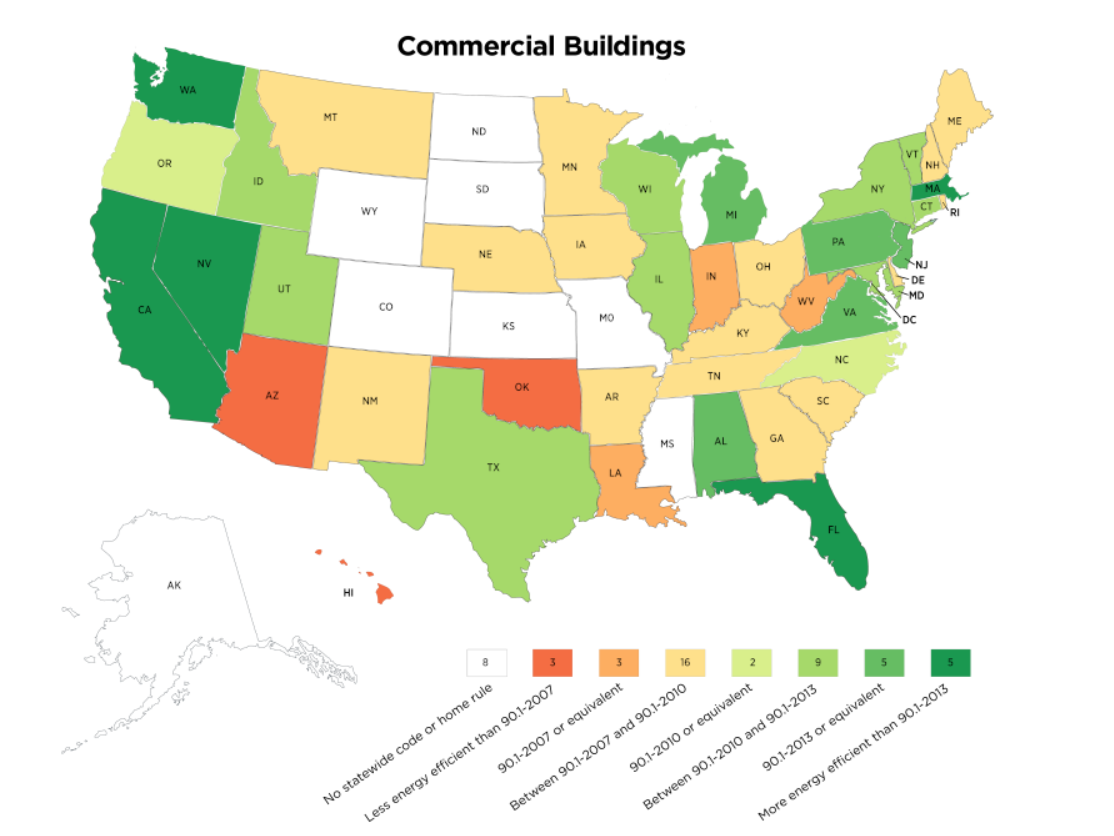 ASHRAE 90.1 is the code with the most direct impact on glass and glazing usage for windows in buildings with four stories or higher.

While state adoptions of ASHRAE 90.1, the International Code Council and similar codes have increased, the standard has also become more stringent. In fact, the Energy Use Intensity (EUI) targets required by ASHRAE 90.1—which is calculated by dividing the total energy consumed by the total gross floor area of a building—has been cut in half since the code’s inception.

Energy codes are written to improve energy efficiency to better preserve the environment. The IECC and ASHRAE codes represent a pragmatic approach to addressing the climate zone of the building. The U-value and SHGC targets are based upon a model using 40 percent window and 60 percent wall.

Higher efficiency requirements mean glazing and fenestration are receiving increased scrutiny. Window-to-wall-ratios are actively being analyzed for optimal reductions. New requirements for U-values and solar heat gain coefficient (SHGC) limits are creating demand for high-performance glass and glazings. Designers must also look at the performance of the entire window, which also includes the frame.

For example, in Chicago (ASHRAE zone 5), 90.1 called for a 7 to 9 percent reduction in U-Factor from 2010 to 2013. The following edition called for another 8 to 10 percent reduction from 2013 to 2016. In comparison, IECC called for a single, dramatic reduction, between 16 to 18 percent, from 2009 to 2012, while staying the same in 2015.  Design professionals should expect codes to continue to become more stringent and plan their projects accordingly.

The United States Green Building Council reports that its Leadership in Energy and Environmental Design (LEED) certification program has seen a steady, gradual increase in project registrations from 2000 through the release of LEED v4 in 2016. In fact, the latest version of LEED endorses the Cradle to Cradle Certified™ program, indicating a stronger commitment to material health and improving the impact of buildings on the well-being of humans and the environment.

Product manufacturers like Vitro Architectural Glass also are publishing third-party verified Environmental Product Declarations (EPDs), which are voluntary and transparent reports made by companies regarding the life-cycle impacts of their products on the environment.

Energy codes are dynamically driving the way glass and coatings are used in buildings in their mission to reduce their impact on the built environment. Progressively higher mandates in energy efficiency are pushing manufacturers to look beyond traditional aesthetics and are giving birth to a new generation of higher performance glass paired with new glazing technology.

To learn more about energy codes and how glass selection can impact a building’s environmental footprint, request the Architectural Guide to Glass Codes & Standards.

The Evolution of Energy Codes